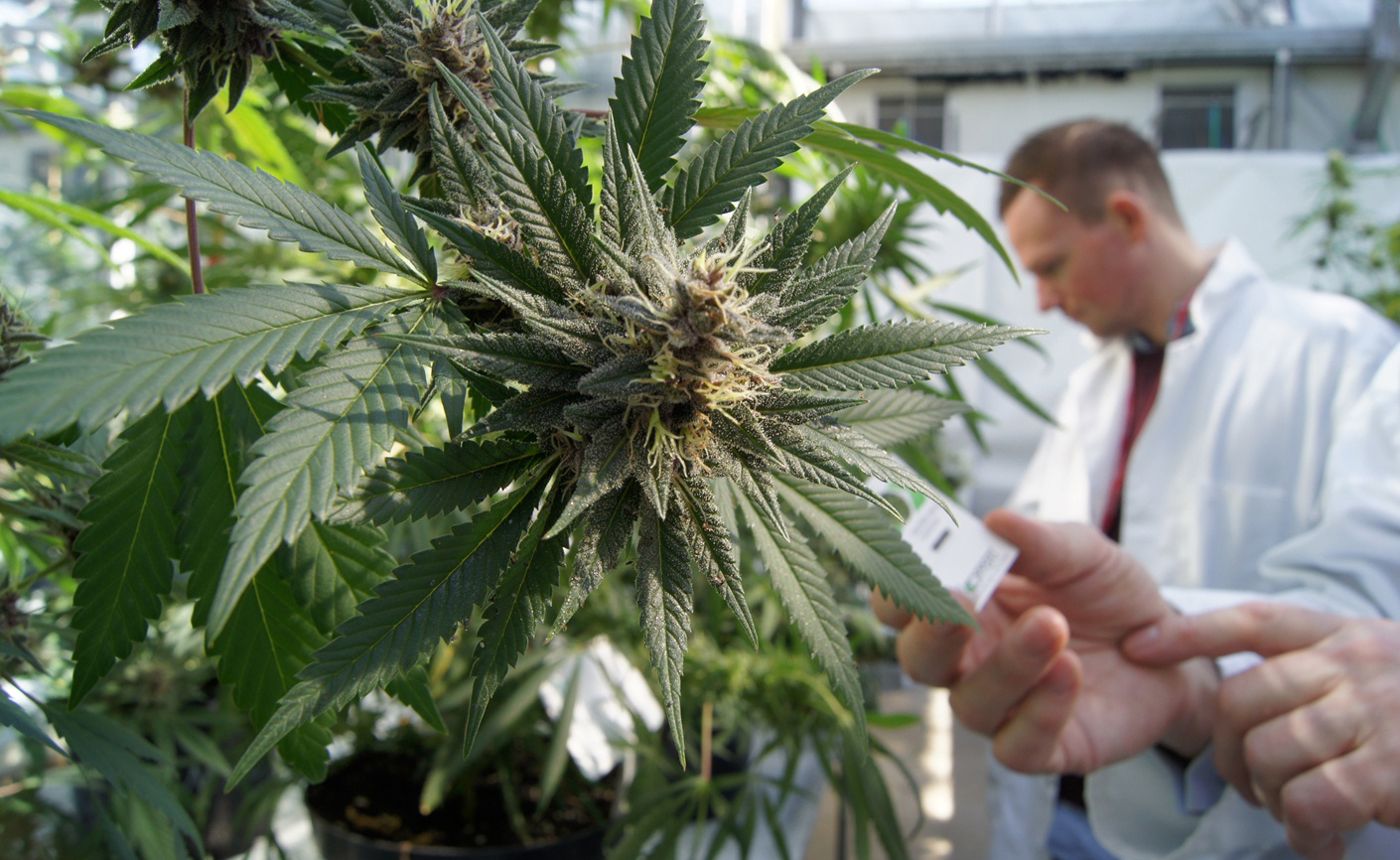 There have been several anecdotal reports of cannabis curing cancer. But less discussion has been publicized about cannabis curing Crohn’s disease and other inflammatory bowel and gut diseases that are considered incurable by mainstream medicine.

Perhaps the most dramatic story has a woman named Shona Banda at its center. Shona was severely stricken with Crohn’s. She was bedridden, and whatever she managed to eat didn’t provide nutrition because her gastrointestinal tract simply wouldn’t absorb nutrients.
She was losing weight and began suffering from cachexia, a wasting away that accompanies chronic disease. Told after several surgeries and stacks of pharmaceutical medications there was nothing more that could be done for her, she was waiting to die.
She managed to see Rick Simpson’s “Run from the Cure,” an online video documentary, and was motivated at first but quickly became despondent. Although she had been smoking marijuana to ease pain and help her sleep and eat, she had no way of making that particular oil, which required a pound of marijuana to produce the cannabis oil she would need to heal.
She had been inhaling marijuana from a vaporizer, known as “vaping,” which is less irritating to the lungs and throat while still being effective. And it produces less tell-tale pot aromas. At the time, Shona lived in the medical marijuana-unfriendly state of Kansas with her husband and two young children.
Shona was in a dilemma about the impossibility of getting enough hemp to make her own oil when her husband noticed specks of oil residue in the inside of the vaporizer’s glass globe cover. So she took the inhalation tube out of the vaporizer and sealed it, then simply collected those little blobs of oil from the inside of the glass globe with a spatula.
She did this three times a day, putting the collected oil residues into capsules and taking it. After a few days, Shona could walk without a cane. Soon she began eating and sleeping better and putting on weight. It wasn’t long before she was able to discontinue all her pharmaceuticals.
Soon she crossed over the Kansas border into Colorado and worked in a cannabis dispensary. She also wrote a book called Live Free or Die, dedicated to the cause of health freedom. She became a medical cannabis advocate and activist.
Video healing testimony from Shona Banda:
But her Colorado stay was short lived. Due to undisclosed “circumstances,” possibly marital and child custody issues, she moved back to Garden City, Kansas, only 50 miles from the Colorado border.
When her 11 year old son innocently tried to explain that cannabis saved his mother’s life after a school class session warning of marijuana’s evils, Shona’s house was raided and the paraphernalia and marijuana she used to create small batches of cannabis oil were confiscated.
CPS agents took her son and awarded custody to her ex-husband in town. She was charged with several felonies and misdemeanors and was released on bail money raised by other medical cannabis activists and users. Now she has filed a lawsuit against city and county officials.

An Official Confirmation of Cannabis’ Efficacy for Crohn’s

In 2013 at Israel’s Meir Medical Center, 21 Crohn’s patients who were getting little or no results from orthodox medical treatments were separated into two groups for a double-blind control study with cannabis.

The half who inhaled the real stuff did much better than those who were deprived in the blind placebo group, some even achieved total remissions over the short eight week trial. Keep in mind that cannabis oil is a more potent approach than smoking or vaporizing for Crohn’s.

Joe Cohen, D.O., director of the Holos Health Center in Boulder, Colorado, discusses cannabis healing with other gut maladies, including “leaky gut.” on day three of the four day Cannabis Summit. D.O. stands for Doctor of Osteopathy. Osteopathic doctors often pursue natural healing tangents from allopathic medicine, but they also can prescribe pharmaceutical drugs and practice surgery. Dr. Joseph Mercola is an example of a D.O.
Dr. Cohen explains complex details in lucid layman’s language during his 59 minute and 30 second interview to easily inform listeners about several gut malady issues, cannabis, and chronic autoimmune disease.
For example, he explains how excess gluten and other triggers among those gluten sensitive create a substance called zonulin. It eats away the “grout” binding the “tiles” or cells in the gut, creating open spaces between the cells that allow food particle leaks to occur. This allows undigested tiny food particles to enter the bloodstream and create infections that can lead to sepsis or blood poisoning.
This creates an overly stimulated immune system attacking the human host instead of protecting it. The overzealous immune reaction causes chronic inflammation and autoimmune disease in different parts of the body. There are many disease symptoms under what Dr. Cohen calls the large umbrella called autoimmune disease.
Dr. Cohen further explains how cannabis heals leaky gut syndrome. Sepsis can ultimately lead to death in some cases, as mainstream medicine’s only “solution” is antibiotics that can worsen this condition. Conventional medicines do not seal up the small intestinal leaks.
But cannabis can. It gets to the cause of sepsis and the less life threatening but debilitating symptoms of leaky gut such as: Colitis; food allergies; arthritis; asthma; hay fever; eczema; chronic fatigue; lupus; MS; fibromyalgia; brain fog; and other autoimmune diseases.
Dr. Cohen explains how the gut microbiome connects to and monitors other immune system factors as well as the brain and central nervous system. Antibiotics do not heal the gut and can disturb the microbiome further by wiping out probiotic bacteria, those good guys, thus creating more problems with various chronic autoimmune disease symptoms throughout the body.
Mainstream medicine’s allopathic attempts at handling these various autoimmune symptoms leads to further misdiagnosis and more damage from medical procedures. Disease and death caused by medical interventions are considered iatrogenic. Iatrogenic disease and death is very high in America
Dr. Cohen expressed awe over how nature has provided all of us with an endocannabinoid receptor system throughout the body that accepts cannabinioids from the cannabis plant. THC, the highly medicinal psychoactive agent, and CBD or cannabidiol, also medicinal but not psychoactive, are the two major cannabinoids that seek entry into receptors of the human endocannabinoid system.
Dr. Cohen is also impressed with how many other relatively unexplored cannabinoids exist in cannabis along with various combinations of turpenes, compounds that give specific colors and aromas to different strains of cannabis.
He explains the we are on the threshold of understanding how different combinations of cannabinoids and turpenes create different entourage synergistic effects, implying there is much more to discover about medical cannabis’ applications.
Both Dr. Cohen and his interviewer, Cannabis Summit co-host nutritionist Laura Lagano, agree that cannabis is an adaptogenic herb. As the name implies, it adapts to whatever is occurring within organs and nervous systems to adjust it toward homeostasis, or proper balance. Adaptogenic herbs can increase or decrease immune functions according to what’s needed for homeostasis.
Cannabis, along with dietary adjustments, strikes at the root of all those various autoimmune symptoms instead of hacking at the branches of several symptoms with toxic pharmaceuticals. Progressive holistic Western medicine has begun to discover what Chinese and Ayurveda medicine have known for centuries: All health begins or ends in the gut.